When presented with a challenge, people respond in many different ways. Some will shy away and hope that the situation improves. Others face the circumstances head-on and deal with the conditions presented. A certain group of people will look for challenges to test their abilities and grow stronger from the task or confrontation.

Of course, the reaction is often predicated by the type of challenge one encounters. One of those individuals who is always up for a new physical test is Fenton native Amy Allwelt. Some of Amy’s friends told us she has a remarkable story. The latest chapter of which features her taking a whitetail buck during this year’s Michigan hunting season. 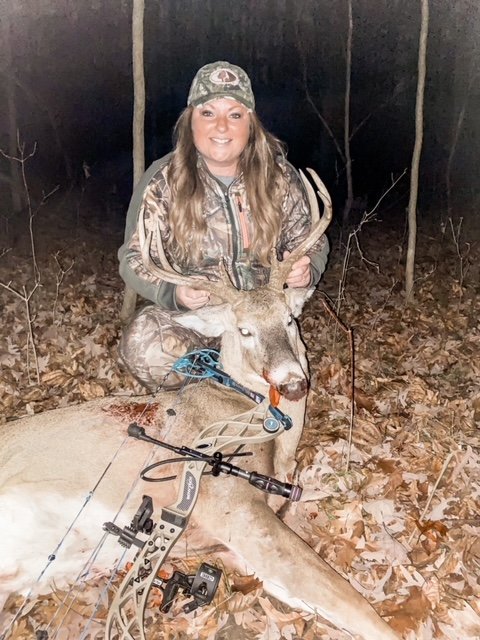 Amy’s deer featured an eight-point rack with an 18-inch spread. It will look good on the wall when she gets it back from the taxidermist who is mounting it for her. The buck was the second she has taken as a hunter. However, it was her first shot with a compound bow.

Hunting with a bow takes a bit more skill than using a rifle or shotgun. The range is much shorter, and the deer is much more likely to notice the hunter’s presence. In addition, you have to be able to pull back the bowstring and silently hold the weight until the moment is right to release the arrow.

Amy’s bow is rated at 50 pounds. While the compound action reduces the hold weight by as much as 50 percent, it takes a strong and conditioned upper body to hold that for more than a few seconds. Making Amy’s trophy a more impressive feat.

A lifelong resident of Fenton, Amy is well-known in the community. She owns a successful business working as a hairstylist. Amy Allwelt Hair Artistry is located in the Sola Salon Studios at the Silver Pointe Shopping Center. The studios offer locations for individual businesses in the plaza that is also home to Bath & Bodyworks, TJ Maxx, Michael’s, and VG’s.

She and her husband, Terry, are the parents of a five-year-old son Walker and a seven-year-old daughter, Avery. The family shares Amy’s love of the outdoors.

Whether it’s going hiking, camping, hunting, or fishing, Amy is always looking to take things to the next level. One of her major accomplishments was accepting a challenge to go on the trip of a lifetime to Africa with the organization Climb for Hope. The charity is a 501c(3) nonprofit that raises money for breast cancer and MS research. Amy participated in memory of her grandmothers, who both suffered from breast cancer. 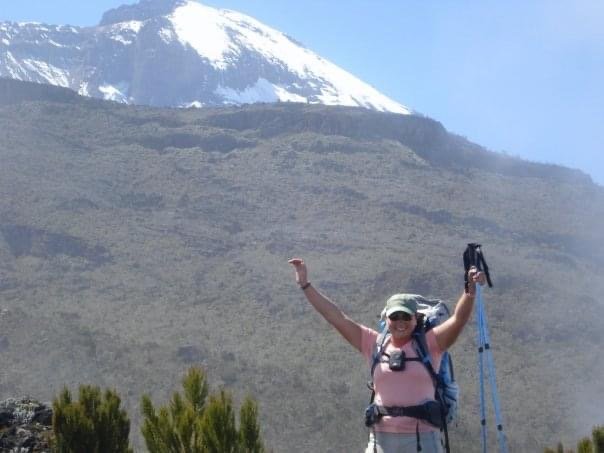 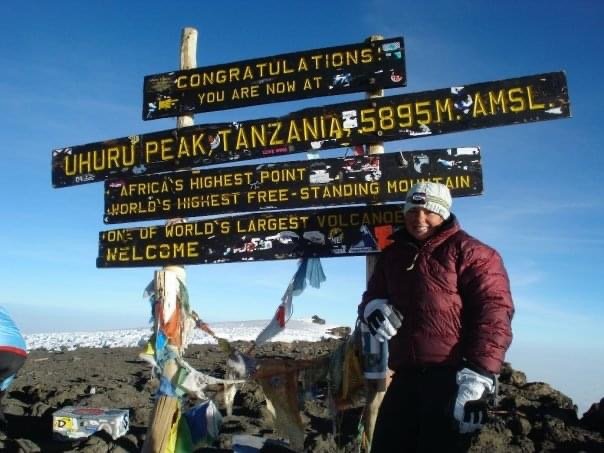 Late in 2021, Amy herself was diagnosed with breast cancer. The biggest challenge of her life and one she certainly did not ask for or expect. However, Amy approached it with the same attitude of perseverance she has in every other aspect of her life.

In January, she began receiving chemotherapy via an intervenous port installed in her chest. The treatment ended in early May. Amy then underwent a double mastectomy, the port was finally removed after she recovered from the operation. 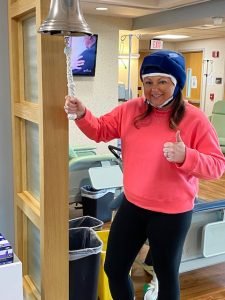 Chemotherapy patients often experience the loss of hair as a side effect of the treatment. As a hair stylist, the thought of losing her signature look and the time it would take to regrow was not something Amy was willing to submit to. She fought the possibility with a process called cold scalping.

Medically termed scalp hypothermia, the treatment consists of placing a cap cooled to -35 degrees Fahrenheit onto the scalp. The patient must wear the helmet before, during, and after the induction of the chemo-chemical. Amy described it as “the worst brain freeze you can imagine.” To maintain the proper temperature, the cap had to be changed every 20 minutes. Her husband, Terry, was there at every treatment to assist with the process.

Amy credits Terry, his and her parents, and their support circle of friends with helping her through cancer treatment and rehabilitation. Sola Salons pitched in with a fundraiser that helped to support the family during the six weeks Amy was unable to work while going through the ordeal.

Some people might have slowed their pace to allow the body to rest from the trauma cancer inflicted. Not Amy. Anxious to resume her lifestyle, she began exercising and running to build back her strength as soon as her doctors allowed.

Pulling a 50-pound bow just a few months after major chest surgery is a remarkable recovery. Making the successful deer hunt an even more incredible story.

Completely cancer free, what’s next for Amy? She plans to run a marathon! No doubt, she will be up to the challenge and succeed as she always has.

Ladies, looking for a new hair stylist? Book an appointment with Amy online at her Sola Salon website https://www.solasalonstudios.com/salon-professional/amy-allwelt1.

If You Ride Motocross You Need to Know MCR Suspension and...